Where to Smoke Weed in DC - Safe and Legal

Weed is becoming more popular in DC, which leaves many enthusiasts wondering: where can you smoke weed in DC? Find out here.

The rules are becoming more lenient, but that doesn’t mean you can smoke wherever you want. But there are plenty of places to smoke in DC where you won’t necessarily get in trouble if you’re careful about it.

Whether you’re a visitor to or a resident of the area, we’ve got you covered. 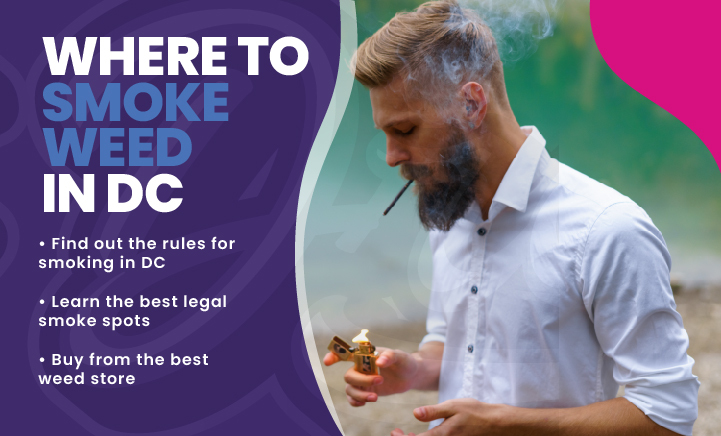 We've put together a handy guide featuring where to smoke weed in DC, the best places to do it, and some general rules you’ll need to know before lighting up in the nation's capital.

Where Can You Smoke in Washington DC?

As a cannabis enthusiast paying a visit to the U.S. capital, you’d understandably like to know: where can you smoke in Washington DC?

In some states, you can smoke weed anywhere you can smoke cigarettes, meaning smoking indoors isn't allowed, but you can smoke outdoors so long as you're away from building entrances and not on federal land.

Unfortunately, when it comes to smoking weed in DC, it’s not quite the same.

Technically, you can only legally smoke weed in DC on private property, such as your own or a friend’s place. However, there are a few other places where it’s acceptable, so long as you’re following the rules.

Places to Smoke in DC

When it comes to smoking weed in DC, it’s not as simple as being able to light up a joint on the street and take a hit while you walk. Knowing where you can (and can’t) smoke is crucial for staying out of legal trouble.

Fortunately, there are plenty of friendly people (and shops!) that are more than happy to help you out. For instance, the staff at Dreams Wellness will do more than provide you with your favorite premium cannabis products. They’ll also point you in the direction of some of the best and safest places to smoke in DC.

So, where can you smoke weed in DC? From local nightclubs to events to one of the hottest places in town, we’ve got your list of safe places to light up.

Smoke in DC at Night Clubs

Let’s start with nightclubs. Some club owners are pretty lax about it, and they’ll let you light up without giving you any trouble.

There are a couple of reasons why it might be okay. First, while you might be in public, you are technically considered to be on private property.

Second, the owners are the ones that say whether it’s okay or not. If they’re cool with it, they’ll let you. That’s the key, though - you need to make sure it’s okay.

Don’t assume you can smoke in any nightclub you visit. Be sure to check first.

Where Can You Smoke in DC – Events

You can also check out weed pop-up shop events in DC.

Here, you can check out some incredible products and may even be able to light up. For instance, a comedian recently put on an event called Higher Laughter.

The event was a comedy show during which attendees were also allowed to smoke. For creative smokers, there are several "Puff And Paint" classes like the ones at Space Ship DC.

Or, if you’re the athletic sort, Lit League features a kickball tournament that’s also open to smoking and drinking.

Where to Smoke in DC – Adams Morgan

One of the best places to smoke in DC, without a doubt, is Adams Morgan. One of the hippest parts of DC, this area is hopping 24/7.

Between the Adams Morgan Art Walk, delicious restaurants, boutique shopping, and a vibrant nightlife scene, there’s always something to do.

The area is also pretty chill when it comes to weed. There are a ton of events going on there, along with an array of bars and clubs where you might be able to smoke.

As a bonus, most people are pretty 420-friendly and won’t mind if you smoke. Even so, it’s still a good idea to exercise some caution and make sure it’s okay before you light up.

Your private residence is the safest place to smoke weed in DC. At least, that’s the case if you own your house.

That’s by far the best place to avoid getting into legal trouble. Or, if you have a friend who owns their own home, and they're also a cannabis enthusiast, you can smoke there, too.

If you rent a house or apartment in DC, you’ll need to check with your landlord first (or be very, very careful about it).

Can You Smoke in Public in DC?

For those wondering, “can you smoke in public in DC?” the short answer is no, you can’t.

You can’t legally smoke in any indoor public or private places (except for your house), nor can you smoke in parks or on federal property.

That goes for tobacco and cannabis. Now, there are some exceptions, which we covered above, like some nightclubs, bars, and outdoor events.

Can You Smoke Weed in DC at Hotels?

Believe it or not, there are some hotels in DC that are weed-friendly. If you’re visiting DC, here are a few places to check out:

Rules for Smoking Weed in DC

When it comes to smoking weed in DC, there are a few rules you’ll want to know:

Can You Smoke Weed in Washington DC – Conclusion

So, can you smoke weed in DC? Absolutely!

Can you smoke in public in DC? That’s a bit trickier.

While you technically can’t smoke in DC in public areas, there are plenty of places to smoke in DC where it’s acceptable.

Knowing the rules of smoking weed in DC and where to go to do it will help you enjoy your favorite strains without getting into trouble.