What Are the Best Magic Shroom Strains?

“Magic Mushrooms” are consciousness-altering fruiting fungal bodies that contain either psilocybin or psilocin, which are naturally occurring psychoactive compounds. There are multiple mushrooms containing psilocybin and psilocin, and there are many variations within each species. Variations of a species are called “strains.” Most magic mushrooms offered in head shops or for delivery are strains within the species classification of Psilocybe cubensis.

If you are curious about psychedelic substances, the cultivation of magic mushrooms, and where to find potent shroom strains, you are definitely in the right place! This ultimate magic mushrooms guide addresses the effects of consuming entheogenic fungi, proper mushroom dosing, and which shroom strains are bought or grown. Continue reading to learn the ins and outs of the fantastic world of entheogenic fungi.

What Are Magic Mushrooms?

Magic mushrooms are the fruiting bodies of fungi classified as entheogenic. Entheogenic substances are any plant or fungi that deliver psychoactive mind-altering effects upon consumption. Mushrooms containing psilocybin, psilocin, or other rare compounds that alter consciousness are entheogenic. And most shroom strains on the magic mushroom market are variations of the species Psilocybe cubensis. Take some time to familiarize yourself with these fantastic fungi by reviewing Magic Mushrooms 101.

Some folks in the shroom community consume these mushrooms for an uplifted mood, high energy, sharp focus, and vibrant visuals. Although, many consume shrooms as a therapeutic aid for symptoms associated with depression, anxiety, PTSD, and other psychological trauma. U.S. laws surrounding the criminalization of magic mushrooms are currently being questioned and lawfully challenged. As shrooms become further decriminalized, magic mushrooms and psilocybin therapy will become more widely accessible to people in the U.S.

Other Names For Magic Mushrooms

What Are the Effects of Taking Shrooms? 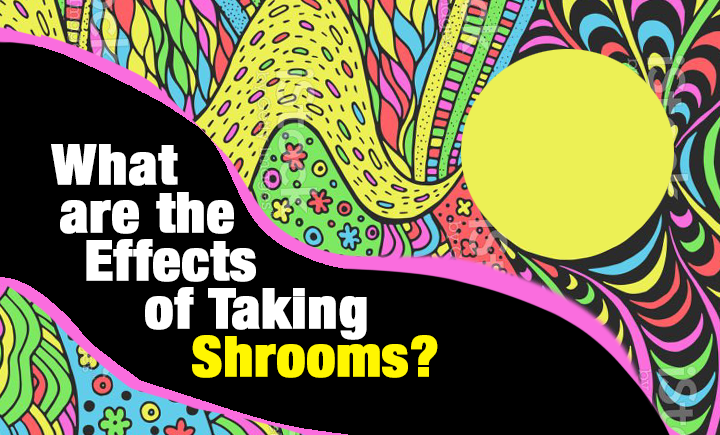 Some magic mushroom strains deliver heavy trips with strong visuals and an intense body high. Other strains offer enhanced focus, energy, and productivity. The effects of each Psilocybe cubensis strain heavily vary depending on its compound contents, compound potency, and dose size. However, there are a few consistent effects that you can count on experiencing after the consumption of nearly any magic mushroom.

After psilocybin shroom consumption, the body often feels heavy with relaxation and experiences heightened physical sensation. Many consumers report a hyper-awareness of the sensations occurring inside and outside the body. When this effect takes place, you may feel the thump of your heart, notice the air entering and exiting your lungs, or become fixated on the breeze against your skin.

Especially in larger doses, shrooms frequently deliver effects such as increased vibrancy and brightness of color, hallucinations of patterns and fractals, or distorted depth perception. These effects often are described as psychedelic, trippy, and magical. Some shroom strains are known to cause heavier visual effects than others.

How Long Does a Mushroom Trip Last? 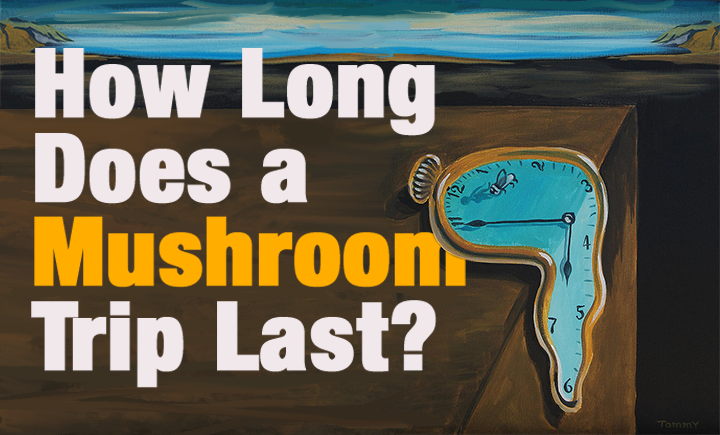 Although psilocybin stays in the system for forty-eight hours, the effects of a trip only last around six hours. Larger doses can cause a high that lasts up to eight hours, and smaller amounts usually deliver a shorter high of four hours. Shroom effects start thirty minutes to an hour after consumption, and the effects typically peak during the second or third hour. Give yourself plenty of time in the day for your trip, and put precautions in place to ensure proper shroom trip safety.

How to Stay Safe During a Long Trip

Keep hydrated, don’t trip on an empty stomach, and do not put yourself or others in danger. To avoid risk, do not drive or operate large machinery under the influence of magic mushrooms. Additionally, if you are new to shrooms, tripping with at least one experienced member of the shroom community is a safe practice. If the trip does not go according to plan, you will have a knowledgeable helping hand.

How To Prevent Stomach Pains During a Trip

Mushrooms containing psilocybin often cause mild digestive issues such as stomach pain and nausea. This symptom occurs most in inexperienced shroom consumers. However, many variables contribute to your body’s reaction to shrooms. Below are tips on preparing your body for magic mushroom digestion and how to prevent digestive discomfort commonly following shroom consumption.

Condition Your Body For a Shroom Trip

New or returning members of the mushroom community should consume an initial dose of half a gram of mushrooms. Wait a week and take twice as big of an amount. After one more week of waiting, your body should be familiar with the chemical contents in shrooms and ready to digest a more extensive “trip” dose without undergoing digestive discomfort.

Keep Yourself Fed and Hydrated

If you experience stomach pain from shrooms, even as an experienced consumer, there are a few ways to soothe the mild mushie gut pain. Eat a full meal before consuming shrooms to prevent an upset digestive system. Drinking plenty of water also helps, as water aids your body’s digestion and its ability to process the mushroom’s chemical contents. Keep yourself fed and hydrated during your trip to keep your stomach strong and your shroom effects pleasant.

Although there are nearly countless shroom strains globally, the list of accessible strains in the U.S. is relatively short. As laws change in favor of entheogenic legalization, more and more stains become available on the magic mushroom market. Learn the potent fan-favorite fungi strains and what highs each delivers to find which shroom strain meets your exact effect preferences.

These mushrooms have yellow speckled golden caps, which give them the name Golden Teachers. These mushrooms first appeared during the 1980s, although their exact lineage and origin are mysterious. Golden Teacher Mushrooms are potent and provide consumers with spiritual insight and a profound, therapeutic high. This is an excellent strain to consume during spiritual healing, mental healing, and times of drought or indecisiveness.

U.S. mycologist Rich Gee created this mushroom strain. Gee got his hands on a spore print of Psilocybe cubensis taken in the Columbian Amazon by the well-known ethnobotanist Terrence McKenna. After Gee obtained and cultivated these spores, he continued cloning the fruiting bodies until all mushroom characteristics met his trait preferences. Once the mushrooms grew large and bruised dark blue, he decided that the cloning process was over, and the Penis Envy magic mushroom strain was born.

As the name suggests, Penis Envy mushrooms often appear phallic in shape and large in size. Consuming this strain includes effects of euphoria, strongly altered vision, and powerful full-body relaxation. Penis Envy is often more potent compared to other common shroom strains. This is an excellent strain to consume before listening to music, viewing art, or laying out in the sun.

Albino Penis Envy (or APE) was cultivated by crossbreeding the Penis Envy and PF Albino Psilocybe cubensis variants. This strain grows white with a blue hue, dries blueish silver, and grows slightly smaller than the original Penis Envy strain. As frequently reported, the effects of this strain are potent and cause deep thought, high euphoria, and vibrant visuals. Watch a colorful sunset, chat with a close friend, or do personal journaling while tripping on Albino Penis Envy shrooms.

The B+ shroom strain is one of the best sellers and fan favorites amongst the magic mushroom community. This strain grows long whitish-blue stems with veils and large light brown caps. Although B+ shrooms are easy to cultivate, commonly sold, and frequently consumed, their origin remains unknown.

This is a good beginner strain due to its mild effects and pleasantly gentle high. With light visuals, calming sensations in the body, and a manageable high, it’s easy to tell why B+ cubensis is the top-recommended strain for newbies or consumers returning from a long psilocybin shroom break.

These mushrooms grow in dung, near decaying wood, or underneath dying trees. Blue meanies thrive in tropical weather, but they grow in many places worldwide. The characteristics and effects of this mushroom were first described in 1871 in Sri Lanka. Unlike most other common shroom strains, blue meanies are not a part of the Psilocybe cubensis species. This strain is part of the Panaeolus cyanescens species and contains two to three times more psilocybin than strains in the Psilocybe cubensis species.

These shrooms grow light brown caps and a webby partial veil. Due to the resilience of the strain’s species, Cambodian cubensis is easily cultivated worldwide and commonly available to magic mushroom consumers. As the name suggests, this strain is indeed from Cambodia. Consumers of this strain often report a productive, energetic, and creative high. Consume Cambodian shrooms before painting a picture, writing a song, or cleaning the house. 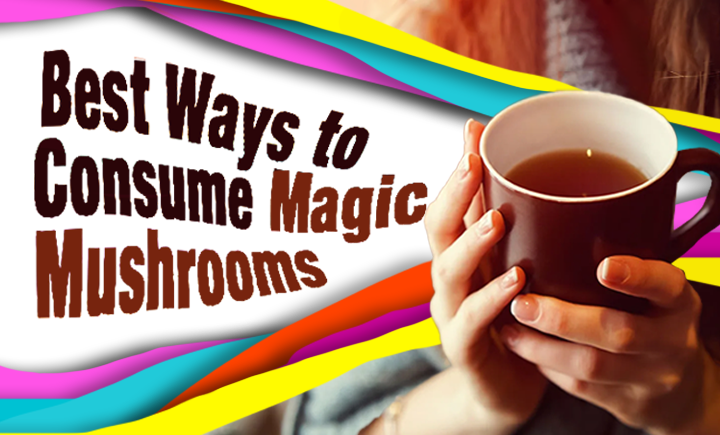 Once you find the right shroom dose for your body and mushroom tolerance, all that’s left to learn is the various consumption methods. Whether you grind your shrooms up, soak them in warm water, or eat them whole, the effects remain relatively consistent. However, your body can process the shrooms more slowly or quickly based on your method of consumption. Read below to learn the best techniques for consuming magic mushies.

Powdered Shrooms in a Capsule

You can blend your shrooms with a kitchen bullet or a small blender and then load empty pill capsules with the powdered shroom. Capsules are a discrete way to carry your shroom dose on the go or bulk prepare doses for the future. Purchase capsule casings in the pharmacy section of most stores or order them online.

Many folks prefer steeping their shrooms in hot water for a trippy tea beverage. Some consumers report feeling the effects more quickly when drinking shroom tea than other consumption methods. You can also add lemon or honey to the mushy tea to mask a bit of the unpleasant shroom taste.

Mask the Taste With Other Flavors

Speaking of shrooms’ unpleasant taste, many pairing foods help them go down more easily. Believe it or not, my favorite concoction is beans, rice, and magic mushrooms. The mixed textures and some added hot sauce distract from the shroom’s taste entirely. Another common food pairing is fruit rollups. Some folks line their mushrooms inside a fruit rollup, roll the candy up like a rug, and tear off small bites for a sweet start to a stellar trip.

Microdosing magic mushrooms are quickly becoming a popular method of shroom consumption. Microdosing causes an uplifted mood, improved productivity, and decreased stress. Take a small dose of shroom powder by capsule or break off small bits of mushrooms and eat them plain. As the medical field catches up to shroom legalization in some parts of the U.S., microdosing will soon be used alongside forms of talk therapy to treat depression.

Now that you know the ins and outs of shroom consumption and how to pick the best strains, you’re ready to begin your mystical journey of magic mushrooms. Pick a familiar location, choose a reasonable dose, practice safety, and consume your shrooms however you see fit. Then, sit back and relax as the trippy effects wash over you. Find magic mushrooms near you today, and learn how to purchase premium local shrooms for pickup or delivery.