Quick Guide To Buying Recreational Weed in DC. Learn quickly how to purchase recreational weed from a trusted and safe cannabis dispensary. 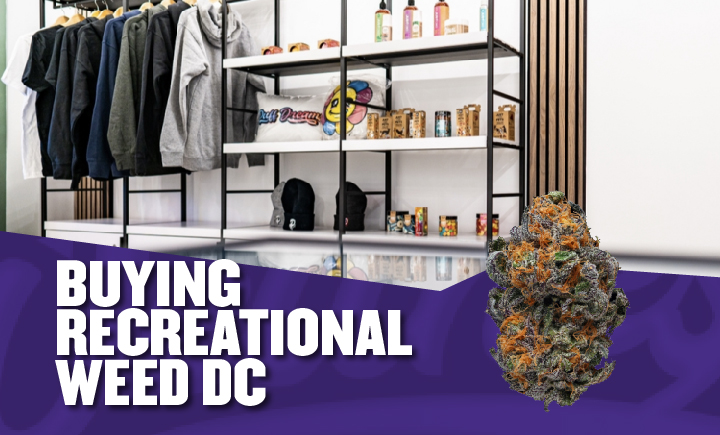 Washington D.C., the nation’s capital, is known for quite a few things. D.C. is a well-known tourist destination, bringing in approximately 24.6 million total visitors per year before the COVID-19 pandemic to see incredible landmarks like The White House, Arlington National Cemetery, the Lincoln and Washington Monuments, the D.C. metro area also has a wide range of pro sports teams to watch, like the Washington Football Team, the Wizards, the Capitals, D.C. United, and the Nationals, just to name a few. What many might not know, however, is that Washington D.C. is a hub for legal cannabis as well!

That’s right folks! On your next trip to the nation’s capital, you can stop into a medical or recreational dispensary, pick up some top-notch cannabis products, and enhance your good times quite a bit. D.C. marijuana has been a hit, to say the very least. Despite weed being legal, however, it can still be quite confusing to figure out exactly how you can get some legal weed of your own while in the nation's capital. That means that if you're looking to get your hands on some cannabis, whether you're a tourist or a D.C. resident, you'll need to familiarize yourself with both the recreational and medical dispensaries throughout the DMV, understand exactly what is allowed when it comes to recreational marijuana in D.C., and familiarize yourself with the unique rules and regulations that come along with D.C.'s Initiative 71. 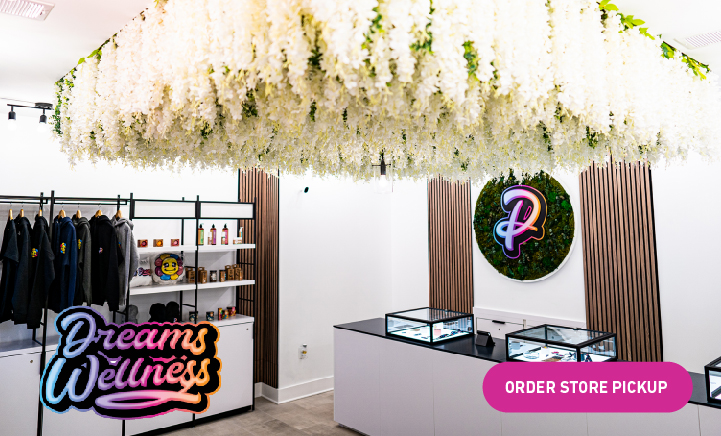 Thanks to the passage of Initiative 71, which D.C. voters approved by a huge margin, recreational marijuana was essentially legalized in the nation's capital. Unlike other states that have passed recreational cannabis legalization efforts, however, D.C. law has a few quirks that residents and visitors alike will need to learn before they enjoy their legal weed. Let's break down those quirks in further detail.

While that might sound complicated on its surface, it's not. D.C. still has brick-and-mortar recreational marijuana storefronts and cannabis businesses, like other legal states, the only difference is that instead of being able to directly sell you the weed directly, they have to include the cannabis as a gift after the purchase of, for example, a bong or pipe.

It's important to note that if you have a medical marijuana card, either from D.C. itself or from other medical-legal states thanks to the capital's policy of reciprocity, you'll be able to just buy medical marijuana products like normal from a medical cannabis dispensary.

Now that you know all about the gift policy, you just need to find a reputable recreational dispensary to purchase from. Due to D.C.'s unique recreational cannabis laws, you have a variety of options for how to engage with buying from a dispensary.

You can show up at a brick-and-mortar storefront and use the gift loophole, or you can opt for the cannabis to come directly to you instead. Believe it or not, there's a thriving culture of curbside pick-up and delivery options when it comes to D.C. marijuana sales. You can get your cannabis products delivered to pretty much anywhere in the city aside from federal property like government buildings and the National Mall, for example, and most dispensary delivery services only take an hour or two to show up with exactly what you ordered.

One of the most reliable and aesthetically-pleasing D.C. marijuana dispensaries around is Dreams Wellness. Whether you're looking for edibles, CBD, pre-rolls, a top-notch strain of D.C. marijuana flower, or legal marijuana smoking accessories, Dreams dispensaries are a resource for personal use for residents of D.C., Virginia, and Maryland looking to buy from some of the finest adult-use cannabis dispensaries in the DMV cannabis market.

Step 3: Know How Much Weed You Can Possess in D.C.

Just like any other recreationally legal state or U.S. territory, it's incredibly important to know the rules regarding how much cannabis you can possess and where you can use those cannabis products without getting yourself in trouble. Knowing the marijuana laws for the place, state or U.S. territory you're in is essential to keep yourself out of unnecessary trouble. In D.C., those rules are about on par with other recreationally legal states.

As long as you're age 21 or older and have the proper I.D.'s to prove it and make sure that you're holding no more than two ounces of marijuana at all times, you should be good to go. Just like in pretty much every other recreationally legal state, you're not able to use your cannabis products in public spaces like bars, restaurants, coffee shops, or on federal property, since cannabis is still federally illegal. Other than that, you're free to use and enjoy your recreational cannabis products on private property or in other non-public spaces.

As a general rule, it's always a good idea to use discretion, be smart with where and how you use the cannabis products you get, and enjoy the many perks of D.C. marijuana legalization in private!

Are recreational dispensaries legal in DC?

Technically, yes they are.  Washington D.C. marijuana dispensaries are legal and thriving in the nation's capital. At least, that's what Washington D.C. voters wanted when they approved I71. For now, however, every non-medical dispensary in the city still has to follow the gift policy until District of Columbia Democrats and the D.C. council approve commercial recreational sales. That may soon change, however.

Late last year, local D.C. lawmakers announced they would be looking to advance a bill that would formally establish a licensed adult-use recreational market in the nation's capital. If passed the bill would immediately render the gift loophole obsolete and unnecessary, allowing recreational dispensaries to just sell customers cannabis like every other recreationally legal state in the U.S. Simply put, it would be a massive step in the right direction for legal cannabis businesses in the nation's capital if the bill were to pass. That bill still has a few hurdles to overcome, however.

The largest of those obstacles that needs to be overcome or avoided is the so-called "Harris Rider," a possible proposed amendment to the appropriations bill that would stymie the local government from using locally-raised funds to create a tax-and-regulate system for recreational weed in D.C. As long as that pitfall can be avoided, however, the residents of the DMV will finally have the same access to recreational cannabis as folks in other Northeast states like New Jersey, New York, and Massachusetts, just to name a few.

Is it Legal to Smoke Weed in D.C.?

Smoking weed in D.C. is absolutely legal, yes. But there are some loopholes here that you'll need to worry about. Thanks to I71, possessing and using recreational cannabis is well within the law. That doesn't mean that you can just spark up in any public place without fear of consequences, however!

What is the penalty for getting caught smoking weed in D.C.?

While D.C. law does allow for people to possess up to two ounces of recreational marijuana products and use them freely in private spaces, there are still consequences for sparking up in public in the nation's capital. The worst-case scenario for lighting up in public can be as hefty as a maximum $500 fine and 60 days in jail, but that's only for repeat, serial offenders. Most times people are caught smoking weed in D.C., it's just a slap on the wrist, a minor fine, and a big chance you'll end up getting the cannabis you have confiscated.

If you're caught with weed on federal property, however, you won't get off that easily. Since cannabis is still classified as a Schedule 1 substance here in the U.S., putting it on par with more dangerous drugs like heroin, LSD, ecstasy, and peyote in the eyes of the DOJ, possessing or using cannabis products with more than .3 percent THC is a federal crime worthy of jail time.

According to Norml, a non-profit organization based in D.C. committed to nationwide cannabis legalization and criminal justice reform, the first offense for getting caught with any amount of cannabis on the federal level is as much as a year behind bars and a $1,000 fine. Getting caught possessing any amount of cannabis with more than.3 percent THC for the second time means as much as two years in jail and a huge $2,500 fine. That's not even factoring in the additional intent to sell, cultivation, and paraphernalia charges that could stick depending on where, when, and how much cannabis you're caught holding by law enforcement.

Long story short, don't get caught with any type of weed by any type of law enforcement while walking around the National Mall or visiting a national monument unless you're ready and willing to spend some time in jail. You'll be in a lot more trouble than you would be if you just sparked up back in your hotel room or outside your local D.C. dispensary where recreational cannabis is decriminalized and medical cannabis is fully legal as long as you have a medical cannabis card of your own.

Is there a legal limit to how much weed you can have in DC?

While there is a limit for how much D.C. cannabis you can possess on your person at once, those limits are more fluid if we're talking about overall possession.

According to the letter of the law, adults aged 21 and over can legally possess up to two ounces of marijuana on their person, as well as paraphernalia like bongs, pipes, vape pens, and one-hitters. There are more advantages for permanent D.C. residents, however. D.C. residents may also grow up to six cannabis plants, although only three can be mature at a time. That gives home growers a wide variety of options for what to do with that cannabis they're growing. Just like with the dispensaries in D.C., home growers aren't allowed to sell the cannabis they grow. They can, however, "gift" or just give away up to one ounce of marijuana. Basically, if you're growing your own cannabis, you need to follow the same rules as D.C. marijuana dispensaries do when it comes to the gift loophole.

It's incredibly important that you follow the law when it comes to gifting the cannabis your plants produce as well. While cannabis has been widely decriminalized in the nation's capital, those deemed to be selling their homegrown cannabis will likely be in a lot of legal trouble. Getting caught selling that cannabis instead of gifting it likely means six months in jail and a hefty $1,000 fine, with penalties for subsequent offenses climbing to 2 years and $5,000.

Simply put, it just makes more sense to know and follow the law if you're a D.C. cannabis home grower looking to get rid of some buds your plants have produced than it does to be locked up, fined, and in trouble with the law for doing so for profit.